The Omnipotence Paradox and the Omniscience Paradox are two separate arguments, but they are both variations of a common theme -- that the popular conception of God cannot exist because of the intrinsically self-contradicting properties of omnipotence (being all-powerful) and omniscience (being all-knowing). These arguments cannot prove God's nonexistence; they prove that God suffers from limitations -- God can exist, but not “as-advertised,” because he is a “lowercase-g” god. However, these limits synergistically reinforce each other, and contribute to the Problem of Evil. The end result demonstrates that the Christian God is not all-knowing and not all-powerful, because the nature of omnipotence and omniscience requires the two to come as a matched set. Since God cannot be both or either, he is then neither, as illustrated in the truth table below:[1] 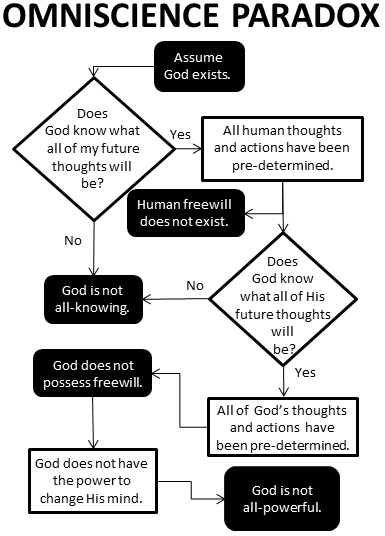 If God knows all of your future thoughts, then he already knows what you will think, act, do, and say before you ever do it. There is no reason for God to test or to try any man, because God would already know what the outcome will be. As a result of this, humans would have no freewill; we would merely carry out the orderly, clockwork actions of God’s predetermined plans. While apologists may argue otherwise, it is only an illusion because their predetermined opinions regarding freewill are a part of God’s plan.