The Teleological Argument, also called the Argument from Design or “Intelligent Design”, is the Creationist's favorite argument. Creationism solely consists of cataloging Teleological Argument paraphrases. This was once the most popular argument for the existence of God,[1] which Christian apologists of all denominations used to persuade their members and combat atheists. However, its use fell out of vogue following the Dover Trial.[2] The Teleological Argument is credited to St. Thomas Aquinas, who described this argument as the fifth and final proof for God's existence in his magnum opus, Summa Theologica (1274).[3]

The Teleological Argument is commonly stated in one of three ways: the Analogical “Watchmaker” Argument, and its variations; the Anthropic Principle (Fine-tuning Argument); and the Argument from Universal Truths and Natural Laws. Each of these arguments have a few common shortcomings:

There is no limit to these kinds of arguments, all of which hold the same weight.

The Analogical Argument from Design draws an analogy between natural objects and man-made items. This argument is credited to William Paley, who popularized it in his book, Natural Theology,[10] and its example of finding a watch lying on the ground. How would one go about determining its origin? Since both the watch and living things display an intricate combination of specialized parts working in defined processes, they must both be consciously designed.[6] Just as a watch implies the existence of a watchmaker, life implies the existence of a creator god.

A key feature of this argument is how living things are assemblies of distinct parts, which perform specific, specialized functions; the failure of any one part causes a domino effect which kills the organism. The existence of these specialized components is claimed to be “irreducibly complex;” that is, they are allegedly inexplicable by evolutionary or iterative processes, since any living systems requires the absolute “irreducible” basic set of these specialized parts to be alive in the first place. Intelligent Design advocates claim that natural selection could not create this system from some evolutionary pathway of successive, gradual modifications, because their functionality only exists when all the parts are assembled.[11] Removing any component from a complex biological structure renders that system inoperable. Since only fully-functional body parts offer survival advantages, natural selection wouldn’t perpetuate eyes, wings, etc. which were “under construction” or “on the verge of working.” This is what led creationists to frequently ask “What good is half an eye/wing/etc.?” The limit to which science can provide complete explanations on the formation and functionality of living systems is cited as proof of an Intelligent Designer, which is assumed to be God.

However, this is the literal definition of the God of the Gaps Argument, which is an extension of the Argument from Ignorance -- the fact that something is unexplained doesn’t mean it’s inexplicable. Science is a process for discovering information, which is still in progress.[7] Evolutionary biology is rich with counterexamples of how earlier structures were re-appropriated, adapted, and gradually refined and optimized to fit new roles. Each component of a Rube Goldberg machine is also irreducibly complex; and gradual refinement of such a system would eventually lead to a sleek, efficient mechanism.[11] Analogously, each watch component had a previous alternate use, which was modified and adapted to fit that particular application. The watch’s gears are miniaturized mill components. The watch’s face is a window. The strap is a shrunken belt. Likewise, the historical record shows plenty of “fossil” evidence of primitive timepieces (e.g., sundials, water clocks) which preceded the watch, and influenced its construction.[9] Nature herself flatly contradicts the creationist’s all-or-nothing argument. For example:

These are exactly the results that one would expect from evolution’s ad hoc, Rube Goldberg, do-whatever-works-right-now design ethos. If there is an intelligent Designer, he’s probably MacGyver.

Since any degree of environmental awareness provides a tremendous competitive advantage, natural selection permits the propagation of these “half eyes,” because having half of an eye is a superpower in the world of the blind. Even a simple patch of light-sensitive cells enables an organism to vertically orient itself and to detect potential predators or prey which eclipses the light source. This eyeless lifeform will produce eyeless offspring -- but suppose that a mutation caused a few of the offspring to possess light-sensitive skin cells. These offspring would have a competitive advantage to avoid predators and reproduce more easily, and thus be more likely to perpetuate this characteristic. Suppose now that a few of this creatures offspring suffered a mutation where their light-sensitive cells were concentrated into a single location, thus amplifying their sensitivity. Again, this competitive edge would quickly spread throughout the future generations, since the offspring which did not display this characteristic would be more likely to die before reproducing (from increased predation, reduced food-finding). Next, let us suppose that a tiny percentage of the next generation of offspring possess a slightly concave shape to their light-sensitive regions, to help discern the direction of light sources, conferring another reproductive advantage. Since cells are filled with semi-transparent liquids, it wouldn't be too surprising if this liquid occasionally found itself within the concave surface of these light-sensitive regions, thus gradually developing an eye.[13]

Lungs developed from a similar process, by lining the mouths of early fish with blood vessels to allow them to gulp air when in shallow muddy waters, and eventually to travel across land from puddle to puddle. Fish also retained and modified this proto-organ, which evolved into the swim bladder. "Fractional" wings also confer benefits, since they can act as airfoils for gliding and/or for slowing and controlling jumps and falls.[10]

Creationists argue that the particular combinations of atoms which form the basis of living things are simply too complex to have emerged from random processes. Furthermore, it would be impossible for life to ever develop if any one of these narrow windows of opportunity had closed. A purely random selection and combination of atoms which results in life-generating chemical processes was been calculated to be far less than the probability of one person winning a billion state lotteries, every day, for a billion millennia. Therefore, it would be “an act of faith” to believe that conscious design was not involved.[6] This is the Probabilistic Argument, also called the 747 Argument since it is usually illustrated by the whimsical analogy of a tornado striking a junkyard and assembling a fully-operational Boeing 747 jumbojet.

This argument is a false dilemma between design and chance, based on the Principle of Indifference (i.e., the Principle of Insufficient Reason), which assumes if there are n possibilities in an unbiased system (where no one result is more or less likely to occur), then the probability of each occurrence is 1/n. Then the probability of a biological structure comprised of m atoms spontaneously forming is (1/n)m, which becomes vanishingly small for large values of m (as in the case of DNA, proteins, or other complex molecules). However, the creationists incorrectly assume that all combinations are equally probable, when the process of assembling biochemical structures is restricted by several intrinsic biases, such as:[4]

The Anthropic Principle, or Fine-tuning Argument, claims that any slight variation of the universe's physical parameters would have prevented the formation of life; that quite literally, this is the best of all possible worlds. This “fine-tuning” of the universe’s parameters necessitates a “tuner;” and this indication of design is evidence of an Intelligent Designer.[8]

However, the fine tuning argument fails because it is based upon a series of false or flawed assumptions:[2]

From this, two conclusions are drawn:[2]

There are a number of general refutations to the fine-tuning argument:[12]

Additionally, there are some specific arguments which apply to specific parameters and parameter sets:[12] 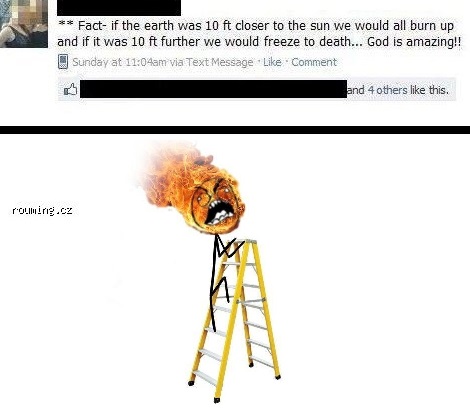 The Fine-tuning Argument is actually one of the better arguments against the existence of God, since an all-powerful God would have no need to fine tune the universe. If God is all-powerful, he could have created us to live in any environment. The Fine-tuning Argument only highlights how life was specifically made to fit the Earth, and not vice-versa. To claim otherwise is like claiming that God created rivers to perfectly align with state borders, and to provide water supplies for major cities.[8] If God created the Earth as a perfect sanctuary where life could flourish, then why is the so Earth hostile, rather than facilitating, to human life? 75% of the Earth’s surface is covered with unpotable water, and great portions of its landmass (e.g., Antarctica, Siberia, the Sahara) are uninhabitable, or close to it.[13] Furthermore, the Earth was also fined-tuned to create earthquakes, volcanoes, hurricanes, tornadoes, floods, droughts, desertification, and other disasters with such frequency that man cannot help but to ponder the Problem of Evil.[6]

The Argument from Universal Truths and Natural Laws claims that the existence of universal truths (e.g., 2+2=4) and/or the laws of physics (e.g., Newton’s Laws, Maxwell's Equations, the Laws of Thermodynamics, etc.) are proof of God’s existence, as laws imply the existence of a lawgiver.

However, this argument is a false equivalence, since it ignores the differences between prescriptive laws and descriptive laws; i.e., between "rules" and "practice".[8]

The universe is not governed by anything. Natural laws, like the Laws of Physics, are human inventions. They are not restrictions on the behavior of matter; they are restrictions on how physicists can formulate their mathematical models to describe their observations of matter. The laws of physics are just statements regarding observations of matter in regards to the symmetries and objectivity of nature. When a law is broken, it is because a symmetry has been broken, or because some observation is being described from a unique or subjective viewpoint. These laws must also be a part of any mathematical system. Emmy Noether proved that the laws of conservation of linear momentum, angular momentum, and energy follow automatically from, and must be part of any mathematical theory that does not single out any particular position in space, direction in space, or moment in time, respectively.[2] Einstein’s General Relativity extended Noether’s Theorem to 4D space-time.[12] Again, it is worth restating that these are all human inventions -- including the notions of space and time. Time is by definition, what a clock measures. Space is defined by the time light takes to travel between points. Despite this, the results of their observations are not arbitrary; they must yield consistent results, or the model is falsified.[2]

If God exists, then he must have a functioning mind, which must also be “governed” by laws, lest God have a randomly-constructed mind, akin to a randomly-wired brain consistent entirely of randomly-firing synapses. The laws which govern God’s mind would thus require an even higher lawgiver, leading to infinite recursion, unless universal truths exist independently of God.[8]

The Entropic Argument for Intelligent Design states that:[4]

The Entropic Argument for Intelligent Design is based on the invalid assumption that the Earth is an isolated (or closed) system. Energy is being constantly added to the Earth via the sun’s light and warmth, and many “anti-entropic” processes are permissible in non-isolated (or open) systems. Your kitchen’s freezer can perform the “anti-entropic” process of organizing liquid water into ordered lattices of ice crystal because it draws energy to perform this work from the power grid. Even if God drove all of the “anti-entropic” evolutionary processes on Earth, the Second Law of Thermodynamics would still hold. This would be a literal instance of the Maxwell’s Demon thought-experiment; if God performed work on the Earth, it would again cease to be an isolated (or closed) system.

When someone tries to make an Entropic Argument, always ask how many Laws of Thermodynamics there are. This will reveal if they have any scientific familiarity, or if they are just parroting from creationist readers and copybooks.[8] If the creationist tries to prove that the existence of Laws of Thermodynamics is itself evidence of design, again, cite Emmy Noether’s proof that the Conservation of Energy follows automatically from and must be part of any mathematical theory which doesn't single out any particular moment in time.